I integrate measurements and models to reconstruct and predict the interactions between terrestrial ecosystems and the climate system from days to centuries. The final aim of my research is to anticipate the impacts of global change on living conditions and particularly on the terrestrial critical zone - the fragile planetary layer that sustains our increasingly pressuring and polarised societies. To achieve this I work across components of the Earth System, collect my own data to improve models and collaborate with colleagues from around the world. My publications and their impact can be found in GoogleScholar.

I hold an MSc in Climate Change and a PhD in Environmental Sciences from the world renowned Climatic Research Unit (CRU) of the University of East Anglia, UK. I was the last student of late Prof. Keith Briffa, a world authority in quantitative dendroclimatology.

I work as a senior scientist (Directeur de Recherche) in the Centre National de la Recherche Scientifique (CNRS). I am based at the Laboratoire des Sciences du Climat et de l’Environnement (LSCE) in Paris, France. In 2021 I was awarded an ERC-stg to improve the ecology of the terrestrial component of the IPSL Earth System model using tree rings.

My work in the media

2022 Laureate of the ERC starting grant 2021 with the proposal Long-term consequences of altered tree growth and physiology in the Earth System (CATES).

I am hiring my team for the CATES ERC starting grant. I look for a motivated technician, 2 postdocs and 1 PhD student. Please email me at Dr. Jonathan Barichivich with the subject CATES TEAM HIRING if you are interested in joining us. 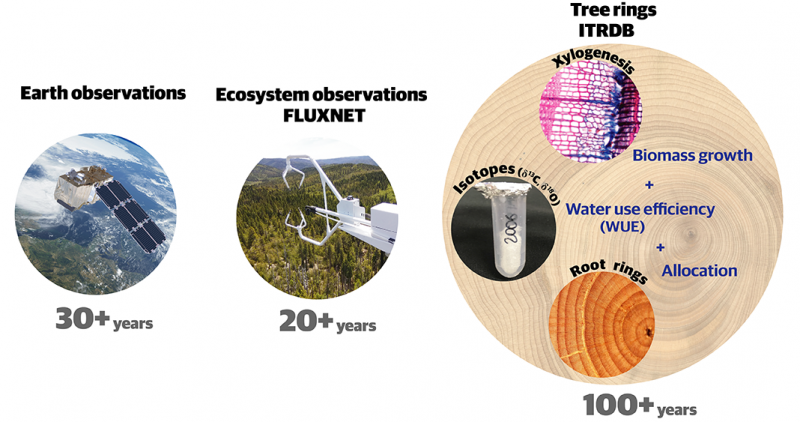 Forests cover a third of the vegetated surface of the Earth and interact with global climate. These interactions are being altered by human activities at an unprecedented scale, both in their rate and in their geographical extent. At present, Earth system models (ESMs) struggle to predict how these climate-vegetation interactions will evolve in the future because of varied responses of the carbon cycle in their Land Surface Models (LSMs). This long-standing issue leads to widely varying atmospheric CO2 concentrations and hence varying climate projections under the same scenarios. LSM projections of forest biomass and carbon balance increasingly diverge over longer periods, thus limiting confidence in future climate projections. The goal of this proposal is to develop a new cross-disciplinary framework to constrain climate projections by jointly improving the simulation of forest growth and water use efficiency (WUE; the ratio of photosynthesis to transpiration) at long time scales (decades to century) using novel observational standards for historical growth and physiology derived from tree-ring data. The proposed work will bring into Earth System modelling decades of advances made by dendrochronologists around the world, providing at last a critical long-term constraint for the land surface modelling community as ice-cores are for global circulation models.

The ancient Alerce Milenario monumental tree in southern Chile is LIKELY more than 5000 years old. This would make it ONE of the oldest LIVING trees on Earth as commented in Science. The paper is coming. 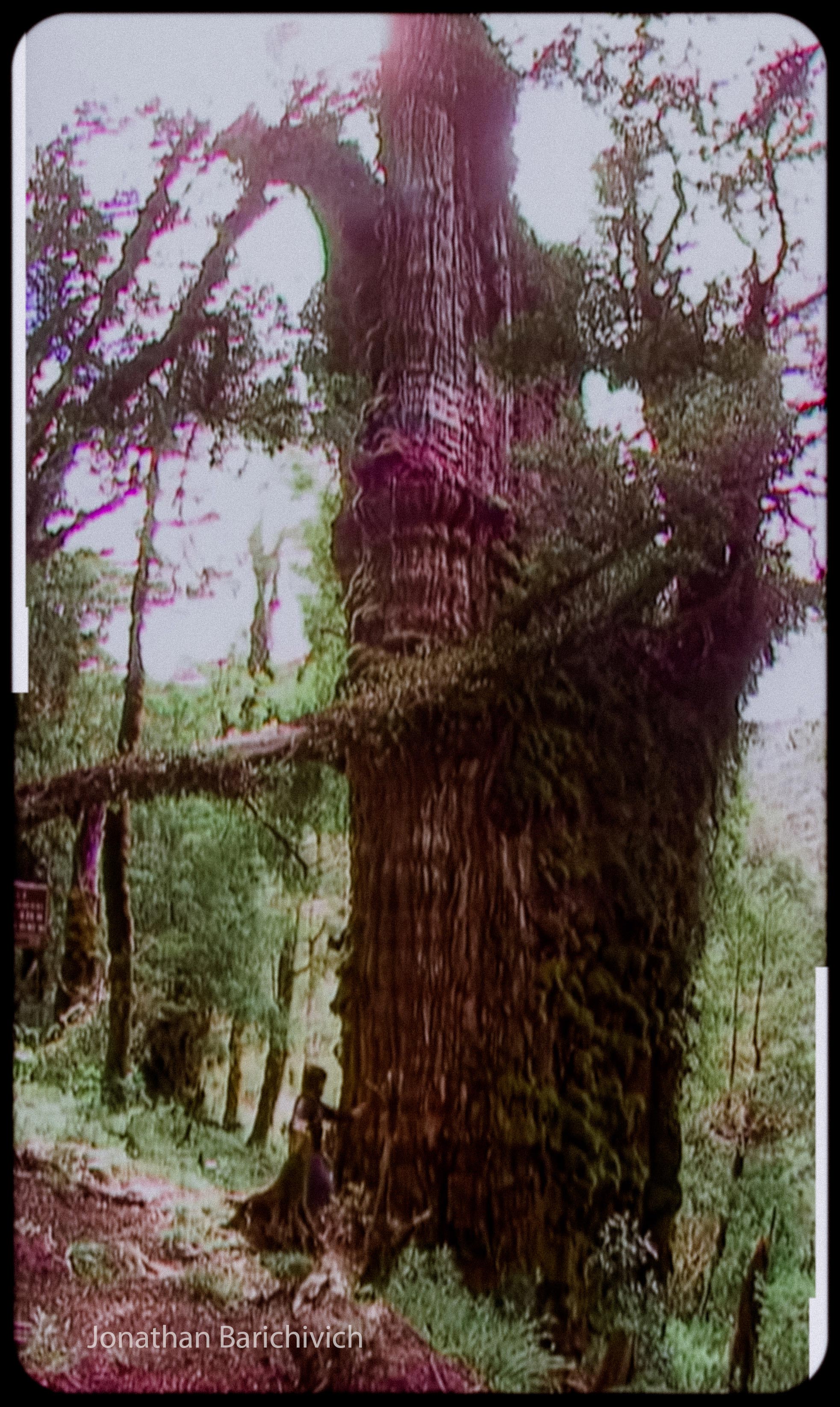 a. Global climate and extremes

One of my primary research activities is on advancing our understanding of processes driving global climate anomalies (climate dynamics) and their feedbacks with the functioning of terrestrial ecosystems (global ecology).

In a recent work we revealed how the intensification of tropical Walker circulation has driven the observed intensification of the hydrological cycle of the Amazon basin. Contrary to the prevailing view on catastrophic drought in the basin, my research showed that flooding is the hydrological feature that has changed most in recent decades. The frequency of severe floods has increased 5-fold since 1960 because of intensified atmospheric circulation and water vapour transport from a warming tropical Atlantic Ocean. In June 2021, the water level of the Amazon river (Rio Negro) in Manaus reached the highest value ever (30.02 m) in the 120 years of daily records.

My findings have been quoted by Sir David Attenborough in the BBC documentaries A perfect planet: weather and Earth’s great rivers: Amazon. A forthcoming documentary production on wildlife of “The Americas” will further highlight these findings.

The acceleration of the global Walker circulation and unprecedented flooding in Amazonia as reported by Barichivich et al. (2018).

b. Reconstructing and monitoring global drought

As part of my work as Associate Fellow in CRU, I lead the yearly assessment of global drought since 2015 in the State of the Climate supplement of the Bulletin of the American Meteorological Society. We provide an annual update of drought extent, severity and location from 1901 based on the self-calibrating Palmer Drought Severity Index (scPDSI) computed using the gridded climate fields from the CRU TS dataset. 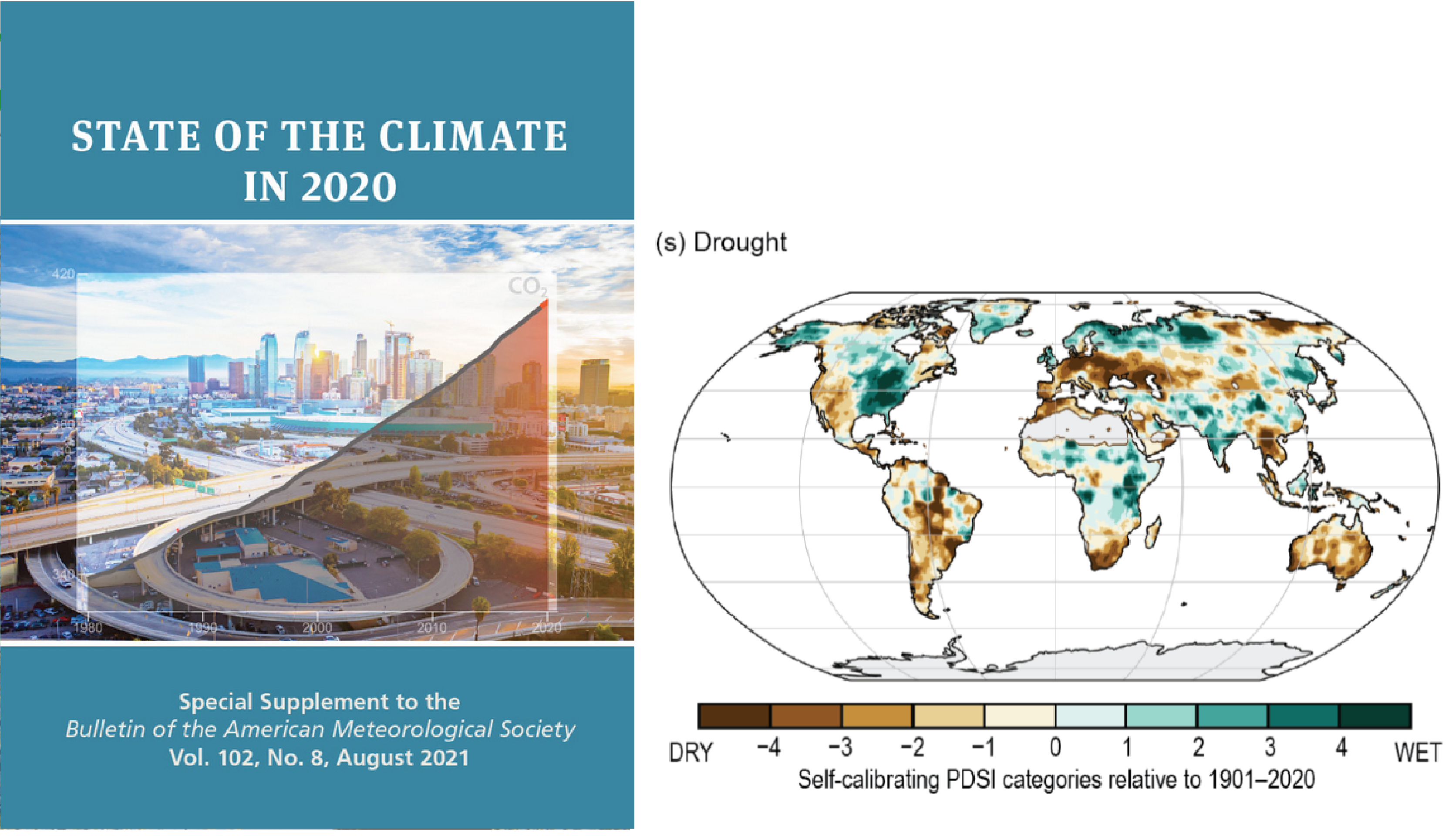 Beside maintaining the instrumental record of global drought, I also reconstruct past drought variability (scPDSI) in space and time using networks of tree-ring records in order to produce drought atlases that can be compared with climate model simulations. I am particularly interested in producing high-resolution drought atlases for sensitive regions at the scale of 5–10 km. The reconstructed maps can be analysed to characterise the spatial extent and severity of past droughts, quantify their impacts on society and ecosystems, and study the mechanisms that cause the different types of droughts (e.g., interannual, multiannual, megadroughts, compound extreme droughts).

c. Monitoring and modelling terrestrial ecosystems in the critical zone

The global ecology component of my research relies on monitoring and modelling of the water and carbon cycle of forest ecosystems in the context of the critical zone. I design and collect my own obervations to advance current process-based understanding in critical areas and improve models useful at different scales. This allows me to pose and answer scientific questions at the forefront of the field. 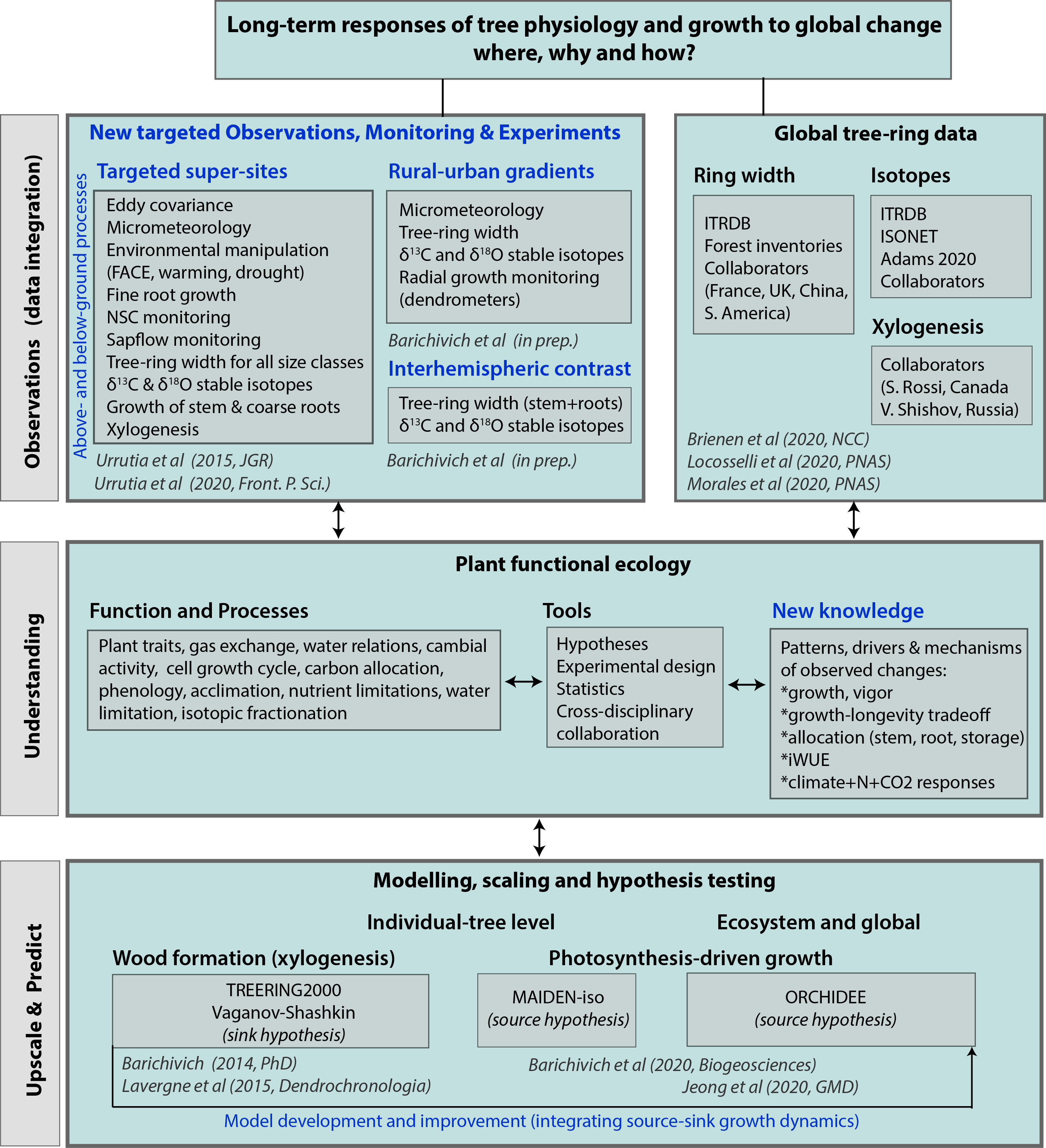 Conceptual diagram of my research program to advance current process-based understanding and projection of long-term responses of forest growth and physiology to global change.

My effort on ecosystem monitoring has been dedicated to the establishment of an observatory of the critical zone in the temperate rain forests of South America as a model to understand the responses of the terrestrial critical zone to climate drying from an integrated above-and below-ground perspective. This biome is undergoing a dramatic drying due to the poleward migration of the storm tracks with climate change and is therefore especially suited to study long-term responses of temperate forests to drought and raising CO2 concentrations under undisturbed nitrogen cycling. 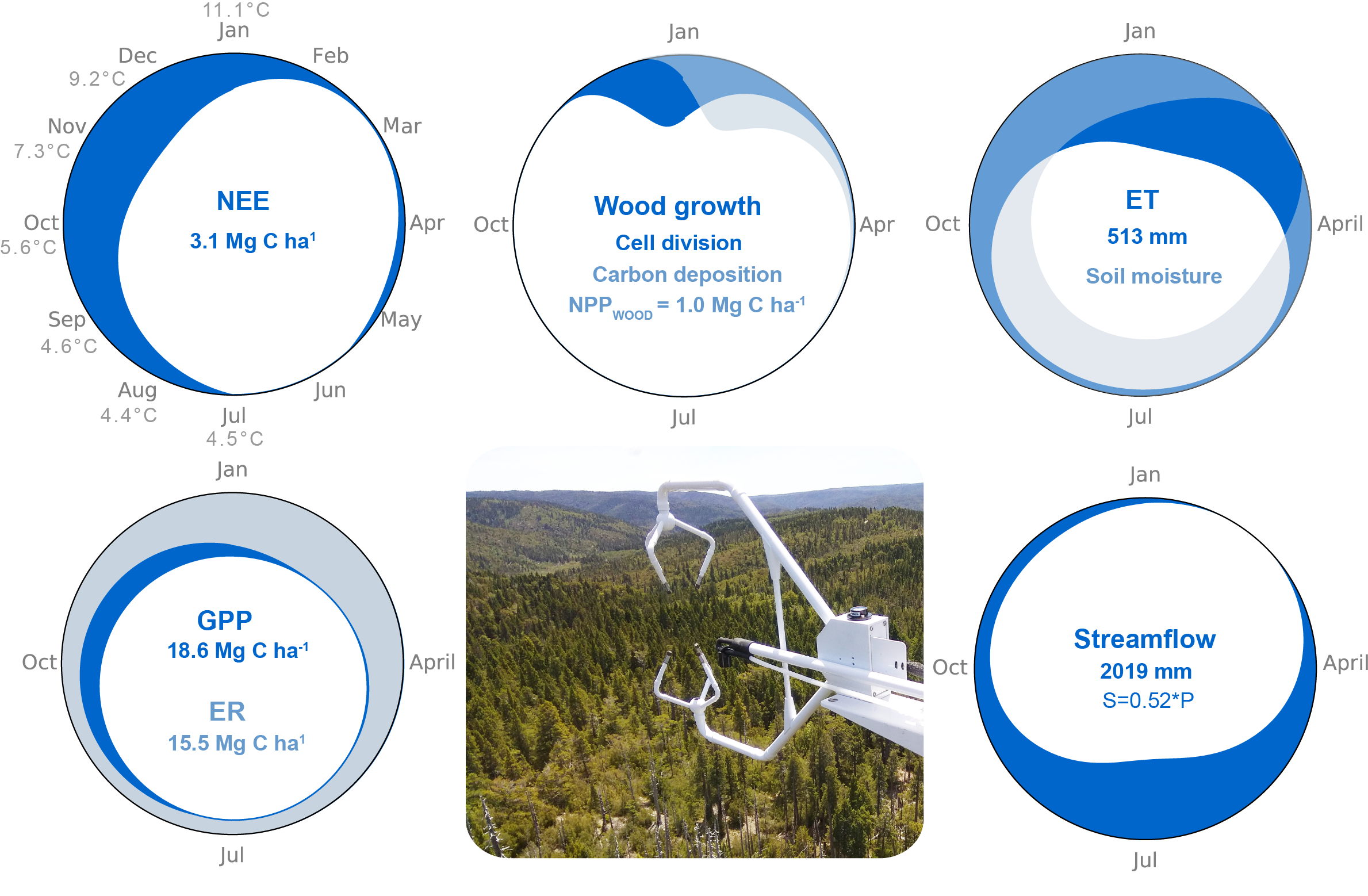 Biological clocks of a coniferous rainforest ecosystem in southern Chile as revealed by simultaneous eddy covariance and cambial growth monitoring.

This innovative research line is at the crossroads of climate and ecology. It draws on my unique skill set across different components of the Earth system. I seek to develop a new cross-disciplinary framework to constrain climate projections by jointly improving the simulation of forest growth and water use at long time scales (decades to century) using novel observational constraints for historical growth and physiology derived from tree-ring data. This involves developing novel uses of tree-ring data (e.g., triple tree-ring constraint pictured below) and updating the biology of tree growth in global land surface models to integrate the so-called source-sink growth paradigms. 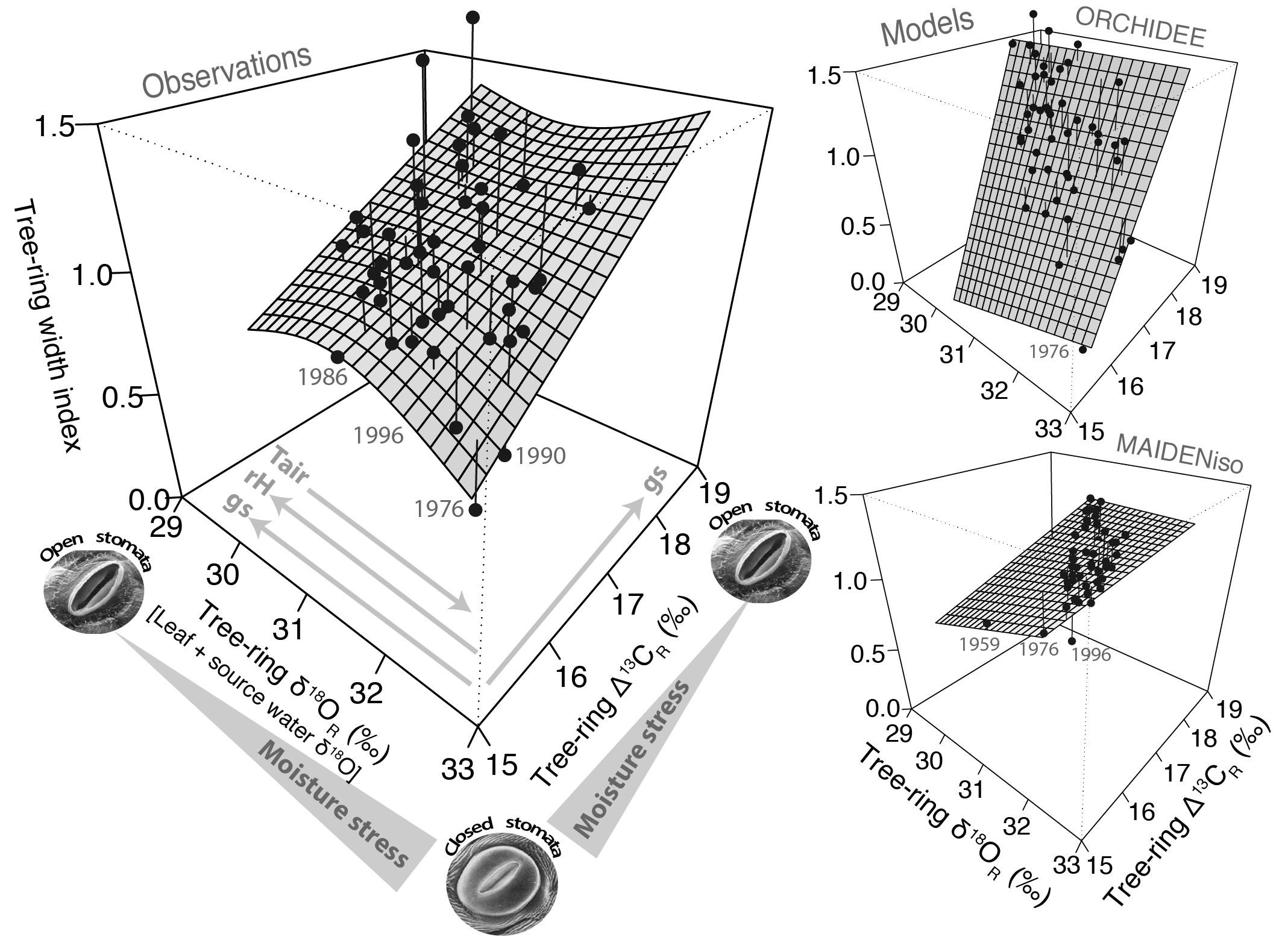 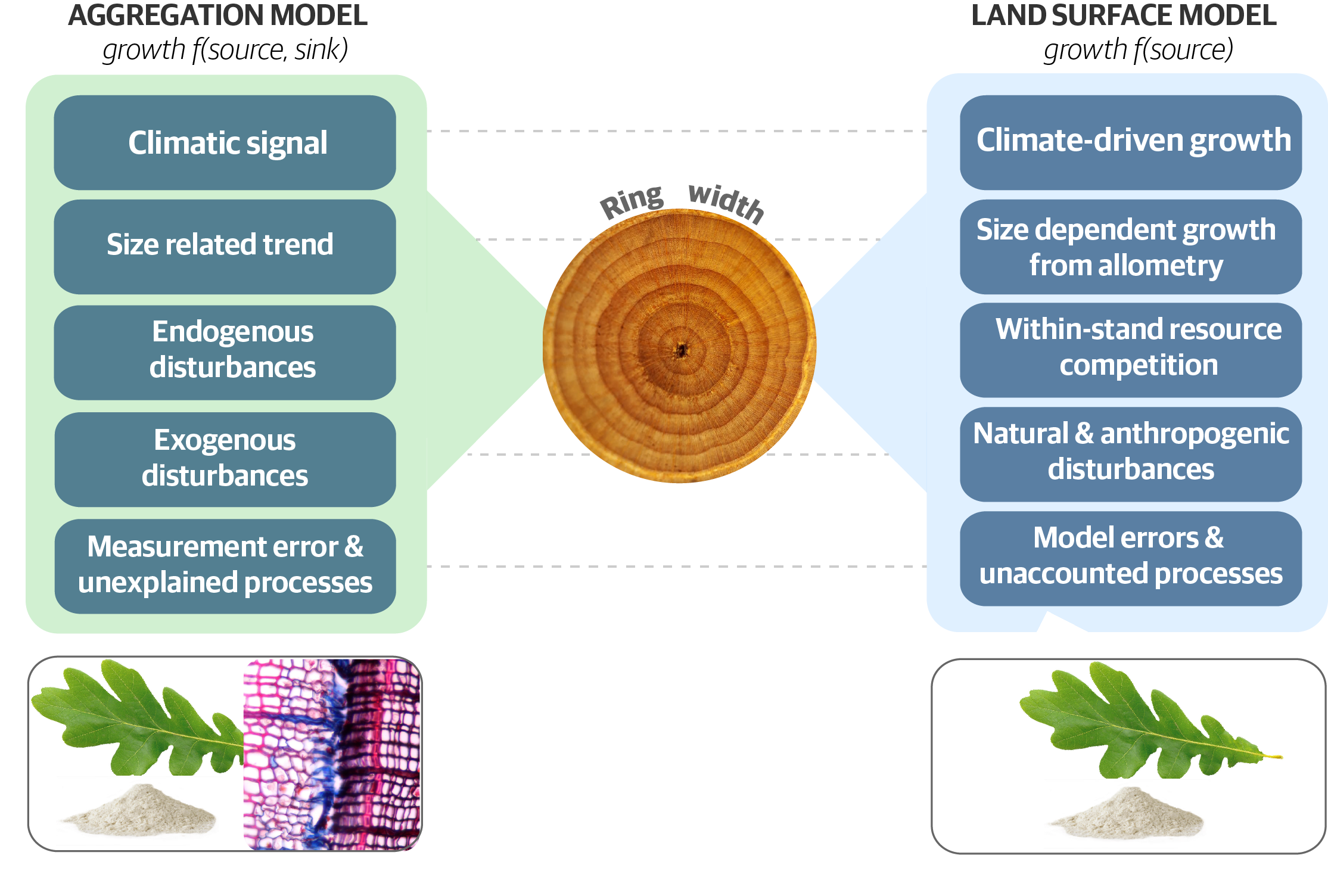 The aggregated conceptual model of tree-ring width (Cook 1987) and the analogue processes simulated by the ORCHIDEE global land surface model.

Altered biogeochemical cycles, with higher CO2 concentrations and significantly stronger warming than in their rural surroundings make cities a natural climate change experiment. Current conditions in metropolitan regions simulate some of those that natural ecosystems will experience with similar intensity in the near future, notably warming. I am exploiting this feature of cities as a convenient alternative to expensive warming experiments.

I am testing if urban-rural gradients in mega-cities can be used to study short-term ecosystem responses (e.g., growth extremes) and long-term adaptations (e.g., water use efficiency, stomatal responses) to climate change factors, in particular to warming. 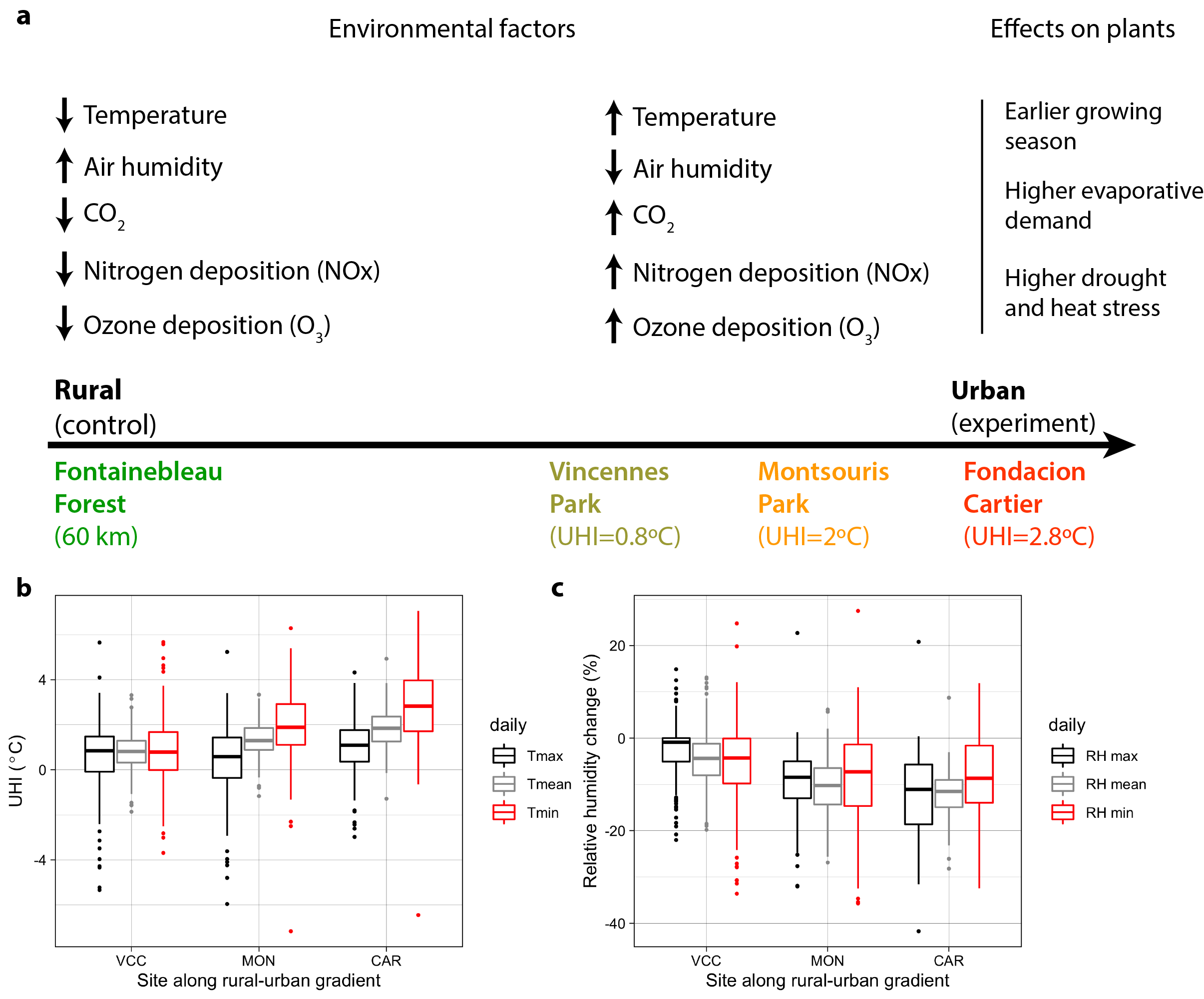 I have dedicated a great deal of time to lead efforts for capacity building in order to attract talented students and start a modelling community in South America. Together with Prof. Alvaro Gutiérrez (University of Chile) we have been successful in obtaining grants for networking with the ETH (Harald Bugmann) and the LSCE (Philippe Peylin). As a result we have created an annual Summer School on Vegetation Dynamics to start exposing students to modelling from an early career stage (see picture below).

I have mentored several undergraduate students at the Universidad Austral de Chile and University of Chile. At PhD level, I have co-supervised Ms. Jina Jeong at VU Amsterdam (ongoing) and Dr. Alienor Lavergne formerly at LSCE on modelling tree growth. 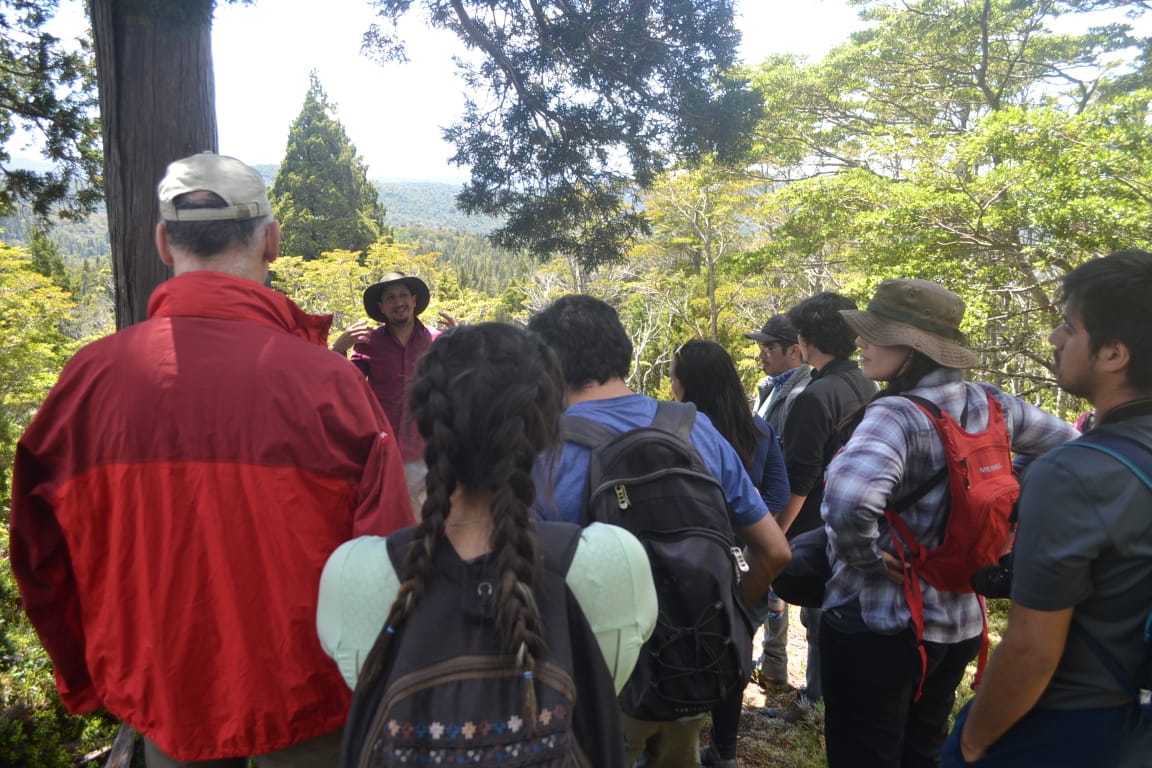 Teaching in the field during the second Vegetation Dynamics Summer School in 2019.